Greece administrates 3054 islands which amounts to around 80% of all islands in the Mediterranean. The largest Greek island is Crete with its roughly 600,000 inhabitants, around 100 kilometres south of the Greek mainland. There is many versions to the origin of its name, however, most of them evolve around the female name “Krete”.

The islands picturesque landscape is characterised by its many hills and mountains which makes for fertile soil, the foundation of a rich vegetation. The 300 sunny days a year are ideal for growing succulent olives and full-flavoured wines. Crete’s 1066 kilometres coastline build a contrast to the abundance of flora and fauna.

As with many islands, the easiest way of getting there is usually by plane. Especially during summer months you will find plenty of offers by low-cost airlines. Once you arrive, renting a car is a comfortable way of exploring the island at your own pace.

Iraklio and the wine country

Iraklio is Crete’s capital city. It may not fit the traditional image of beauty, but take some time to enjoy the numerous cafés and restaurants, admire the local craftwork in the shops and at the market and stroll along the Venetian harbour and out to the sea on top of the fortress walls.

Around Iraklio you can find the beautiful wine country where around 25 wineries produce 70% of Crete’s wine. The scenic hills, slopes and valleys are home to plenty of vineyards where not only the famous Kotsifali, Vilana, Liatiko and Romeiko grapes flourish. 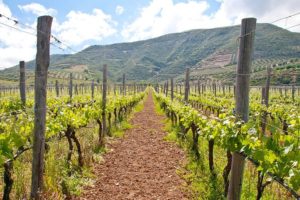 You will find the remarkable ruins of the Palace of Knossos only 5 kilometres south of Iraklio. Excavation of this Minoan Palace started in 1878. This archaeological site is Crete’s most famous historical attraction. Take at least 2 hours to walk around staircases and rooms and be astonished by frescos and pottery. 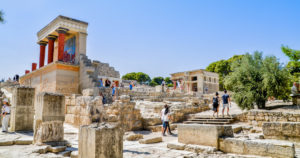 Matala is a small hippie town on the south coast of Crete. According to Greek mythology, Zeus kidnapped the Phoenician princess Europa and brought her to this beach in the shape of a bull. During the Neolithic Period, caves have been build into the soft rock on this bay. They were later used as graves during the Roman Period. In the 60s a large group of Hippies, mainly from the US, used the caves as a hideout. Today you can visit the caves and get a breathtaking view over the bay.

Hania is a charming town in the Northwest of the island. Venetian and Turkish building designs have left enchanting town houses and boutique hotels. This is a great place to wind down, stroll along the Venetian harbour, pick up some souvenirs from local arts and crafts shops and discover some of the best dishes you can find on Crete in Hanias narrow, winding alleys.

This bay all the way up in the Northwest tip of Crete is most certainly one of the most stunning places on the island. The lagoon will win you over with its fine, white coral and shell beach, shallow waters and captivating surrounding nature. 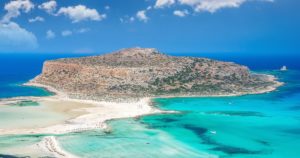